Today Families and Their Physicians are faced with impossible choices.

Recently, some states have enacted Legislator Directed Patient Care, that conflict with the doctor-patient ethical relationship, and the oath, to do no harm.

Since forever, as part of that relationship, providers try to educate patients to make decisions for themselves, about what they feel is right for them, says “Dr. Stephanie Mischell.”

Prenatal Care may also be affected, particularly if they allow prosecutions to go forward against women.

Pediatric cardiologist and researcher, Colin Phoon of New York University Langone Health, shared that before the sixth week, “there is no heart; there’s nothing beating.” 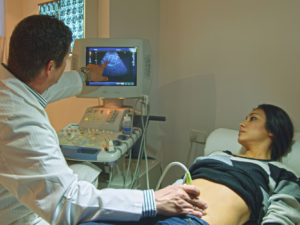 Erika Werner, a maternal-fetal medicine physician at Brown University, and a Society for Maternal-Fetal Medicine board member explained, “You can see a little flicker,” she said.” That’s it.

As a product manual (Huntleigh High Sensitivity Pocket Dopplers) for one such device explains, the sound is the amplified version of the difference between the transmitted and received signals.

All of the major structures appear mostly intact after nine weeks and one day of pregnancy when the entire process is largely complete.

In patients with Lupus (an autoimmune disease), should an inflammatory response flare during their pregnancy, this could then rise to the level of being considered “high risk“.

Should the physician decide to ignore Dobbs, and provide what is the standard of care in the medical community, that would likely result in pregnancy loss or miscarriage, they and possibly their patients could expect to be criminally prosecuted – as you see, these are not easy decisions.

The Loss of an Experienced Medical Specialty – Who Suffers?

As state Legislator Directed Patient Care laws insert themselves into the physician-patient care model, this may create ethical issues for the provider, and malpractice liabilities for the doctor, hospital, and their associated healthcare systems.

The result of having no contingency plans for the “dead space” that immediately followed Dobbs, created this cascading series of events that result in

This new wave of disillusioned providers will not be used to being,

Some may even face incarceration in some of the more extreme states, and if so – is practicing in those states even worth it?

Abortion bans before six weeks in some states depend on enforcement through lawsuits filed by private citizens.

Possible targets: abortion providers and anyone who aids and abets an abortion – after an assumed heartbeat is detected – but which is a “flutter,” only.

Hospitals, Healthcare Systems, Telehealth providers, Pharmacists, Nurses, and Providers are all looking to the legal community for guidance, as confusion reigns from Coast to Coast.

Regarding Catholic Hospitals, the ACLU has collected numerous stories of women being denied emergency care at Catholic hospitals, with more emerging all the time.

By dismantling nearly 50 years of legal precedent, the Court has jeopardized millions of American women’s physical and mental health and undermined the physician-patient relationship’s privacy.

This move will disproportionately impact our most vulnerable populations, such as communities of color, people living in rural areas, and those with low incomes who may have to travel long distances to receive abortions.

Today’s ruling will put many pregnant women and their families into life-threatening and/or traumatic situations.

Unfortunately, with the implementation of Dobbs, doctors have been handicapped in this critical patient-doctor decision-making process. Still, ASCO will work to help our members navigate this new situation and preserve their patients’ access to the highest quality care by providing evidence-based clinical guidance, including fertility preservation, and by advocating for access to all the components of high-quality care.

The American College of Obstetricians and Gynecologists (ACOG)

“We are treating this as a disaster response,” Verma said. “We are in an emergency, and this is a disaster.” Its impact on situations will include miscarriage and in vitro fertilization. The practice of medicine will be reshaped, the group said, or even contradicted by “by-laws not founded in science or based on evidence.” She wondered, “Are surgeons going to be afraid to intervene when a pregnant patient ruptures their appendix because they might inadvertently end the pregnancy?”

The American Academy of Pediatrics (AAP)

Today’s ruling means that in many places in the United States, this evidence-based care will be difficult or impossible to access, threatening the health and safety of our patients and jeopardizing the patient-physician relationship.

The Supreme Court’s fig-leaf justification behind these restrictions was that induced abortion was a dangerous procedure that required tighter regulation to protect the health of persons seeking that care. Facts belie this disingenuous rhetoric.1,2. In view of these predictable consequences, the editors of the New England Journal of Medicine strongly condemn the U.S. Supreme Court’s decision

These laws and policies that restrict or otherwise interfere with the patient-physician relationship put patients at risk by limiting access to quality, evidence-based care.