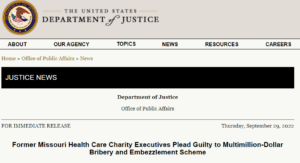 Several former executives from the charity, former members of the Arkansas state legislature, and others have also pleaded guilty in federal court as part of the long-running, multi-jurisdiction, federal investigation including the following:

When facing the Federal Bureau of Prisons, retaining an experienced federal criminal defense attorney, and someone experienced in guiding you through the sentencing process, following the guilty verdict is critical to your future. Should you have any questions, contact us.